Forest Development’s Nautilus 220 in Lake Park, FL. Could Seven Islands be similar minus the height? 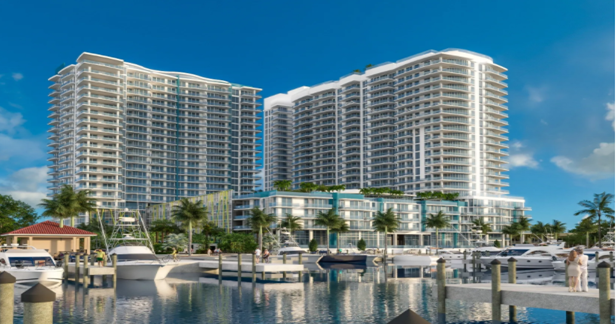 View from above of Forest Development’s Nautilus 220 in Lake Park. 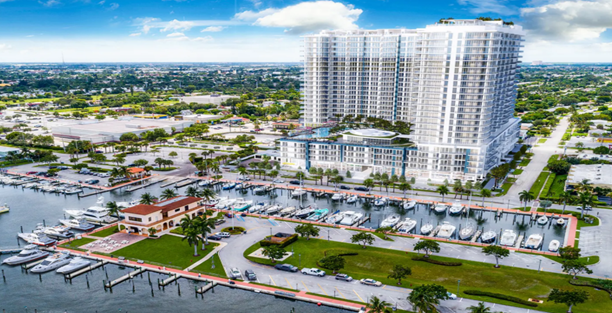 Forest Development estimates the project will generate about 9,500 jobs in construction and development, a total investment of $650 million, and an economic impact of $1.6 billion through jobs, incomes, and economic activities during the 10-year construction period. After construction, total jobs would be about 650 with 400 direct and 250 indirect.

The next step in the process will be for the city to declare the Seven Islands as surplus property and then approve a sale and purchase contract as soon as March/April. The council would then approve a development agreement for the project in June/July. As the project progresses, the city will meet monthly with developers to ensure open communications. This is similar to the relationship Forest had with Lake Park for the Nautilus development. Lake Park lauded the relationship in a letter of recommendation for Forest Development to Cape Coral.

The project team is comprised of 33 businesses all with extensive experience. Many are from the east coast such as R and N Architecture and Insite Studios Landscaping. Katz Construction out of Palm Beach, Coral Gables, and Tampa, has been responsible for multiple projects throughout Florida ranging from high rises in Miami and Palm Beach to three-story multi-family complexes in surrounding suburbs.

Some onboard locally are Hans Wilson Marine, out of Ft. Myers, which has been responsible for 320 marina projects including Cape Harbor and Burnt Store Marina. Avalon Engineering and Gates Construction are well known locally with a long list of accomplishments.   Scott Dunlap, who is a property developer and partner in this project, has a growing local portfolio that includes over 700 acres along the Burnt Store Rd. corridor and knows the area well.

NWNA President John Bashaw said he's excited about the project after witnessing the presentation and that it could be the gold standard for mixed-use development in Cape Coral. He admitted sentiment among Northwest residents is mixed with some for development and some against, though the majority want to see something go up as long as it’s done in a smart and responsible way.

"It's going to be a long, ongoing process,” Bashaw said, “but I'm convinced that all of the necessary parties are going to be a part of it, and we're going to wind up with a high-quality destination in Cape Coral."