On November 10, 2021, City Council was briefed by the Cape Coral Utilities Director, on the tentative results of the ongoing Utility Expansion Project (UEP) Master Plan.

Presently, utilities (water, sewer, and reclaimed water- treated wastewater to be used for irrigation only) are being designed in the North 1 area of the city, and construction is expected to begin in the summer of 2022. The remaining areas of the city without public utilities are the subject of the UEP Master Plan.

The entire agenda and presentation given to City Council are available below.

The following is a brief summary of the preliminary findings and recommended improvements with the future service areas. Service areas are shown on the map below. 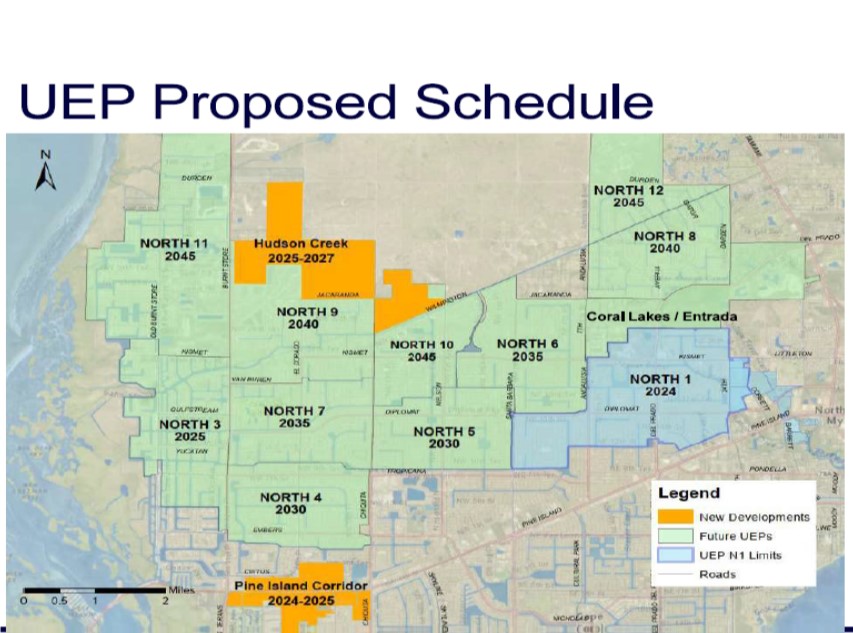 Yes, planning level cost estimates have been included in the UEP Master Plan and these were shown in the presentation given to City Council. However, these costs are on a macro scale, and it's too early to speculate what each homeowner will pay.

It is important to note that the UEP Master Plan is intended to be a guide for future utility expansion. Specific details of pipe and pumping station placements are not yet completed.

This document will be modified (and boundaries of service areas will likely be realigned) as the project moves forward. In fact, City Council and the Mayor have already requested that engineers look at the possibility of moving North 11 up in the schedule.

So, the next steps are as follows:

Again, this is a high-level master plan and is not intended to include specific project details.

If you have comments and questions that you believe are appropriate at this point in the planning process you may email me at publicworks@nwcape.com.

I will prepare a consolidated response of appropriate comments to the city. You may certainly contact your City Council Member directly if you prefer.